Home Alone is just one of those movies that most, if not all North Americans at least know of.  I myself have watched it numerous times with my family–it has become, for a while, a tradition of sorts to watch it at some point during wintertime.  I never thought about it as a particularly profound movie; the only concept I would have thought worth of mentioning is the fact that we tend to underestimate children.

So when I saw that Maeve had reviewed Home ALone, well, I just couldn’t resist featuring it, all the more that the ground is still covered with a thick, white blanket of snow. 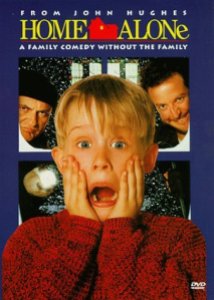 Families suck. That’s the opinion of 8-year-old Kevin McCallister (Macaulay Culkin), whose family unwittingly leaves him behind when they go on vacation. In no time, Kevin makes the most of the situation, watching forbidden flicks and pigging out on junk food. But when a pair of bungling burglars (Joe Pesci and Daniel Stern) set their sights on Kevin’s house, the plucky kid stands ready to defend his territory — by planting booby traps galore!

When my sister suggested we watch a Christmas movie last night we mulled over which to choose.  Did we want some holiday romance with Love Actually, or a Christmas class like Miracle on 34th Street?  Should we watch our annual favorite A Christmas Story?  Instead we dug out an old VHS of Home alone, a movie neither of us had seen in a good 15 years.  I had remembered it being hilarious as a child, with all the booby trapping, but what I had forgot was the poignant messages hidden within this glitzy comedy.  This film not only entertained but spoke to the importance of family, of forgiveness, and of not listening to rumors but seeking out the truth for oneself.

Happy, happy Christmas, that can win us back to the delusions of our childish days; that can recall to the old man the pleasures of his youth; that can transport the sailor and the traveller, thousands of miles away, back to his own fire-side and his quiet home!  ~ Charles Dickens

I think we have all been where Kevin has at one point in our lives.  We let the annoying habits of our loved ones blind us to how much we actually love and appreciate them.  We also can be blinded by prejudice, like Kevin was with his neighbor due to rumors about him being a serial killer.  Instead the neighbor turned out to be a kind old man who was looking to reconnect with his family but didn’t know how.

I think this is something we can all work on, patience and forgiveness.  These two virtues are things that if Kevin and his family had had for one another at the beginning of the film then perhaps he wouldn’t have been home alone.  But patience and forgiveness are tough.  They involve letting go of the ego, and becoming humble, as well as putting others’ needs before our own.

It is also lucky that Kevin was home alone, since burglars had decided to target his house.  One of the great things about this comedy was how responsible Kevin had become when home alone.  After initially partying and going hog-wild, he got bored of that, and instead he went grocery shopping, cleaned the house, put up decorations, did laundry, and practiced hygiene all without adult supervision.  Pretty impressive for an eight-year-old.