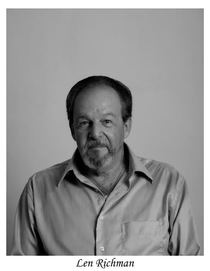 Len Richman has a long history with the Thomas More Institute of Montreal: student, course designer/ leader, Board of Directors member, and Chair of the Accreditation Committee. Travel, work and field background continue in parts of Asia, Europe, Latin America, the Middle East, South Pacific, and Canada’s northern communities. An educator in the areas of literature, wilderness/ outdoor pursuits, adult learning programs, international and multi-cultural studies for decades, a “redirection” of interests after 60 resulted in his becoming engaged in the performing arts: acting, directing, producing and writing. Born, bred and residing in and around Montreal (his favourite city next to New York, Prague, Budapest, and Dawson City, Yukon), he and his wife have three sons who have provided almost “free entertainment” with six grandsons and two “bonus” granddaughters from six to twenty-six years of age. He hopes to maintain sharing his wondering and wandering from his previous book, Raindrops Glimpses Moments: An Unconventional Memoir of an Unplanned Journey, to the present Shivers and Signposts: The Journey Continues, and beyond.

Shivers & Signposts: The Journey Continues is Len Richman’s second exploration of a life measured out by a distinct rhythm of his own devising. Picking up where his first memoir, Raindrops Glimpses Moments: An Unconventional Memoir of an Unplanned Journey, left off, Richman shows in Shivers & Signposts that he still has much to do, and much to say.

Richman attacks life with uncommon vigour. Never motionless, he moves forwards – and sometimes backwards – suffusing each manoeuvre with unique energy…vitality and constant evolution. Shivers at the thought of growing old, of becoming stale…occasional alienation and loneliness, Richman, is driven onwards by “a pressing need to redefine and redirect his innermost self”, a self that he continually re-evaluates through the lens of modern technology, literature, theatre and film. These are the signposts that guide him through his fascinating quest for renewal of spirit and self… Let us hear his decisive commentary on modern social and cultural mores, his unapologetic tackling of issues from racism to materialism to present-day psychoanalysis. Let us listen to the music of Richman’s own Love Song, about the love of a life well-lived – and still well-worth living. Let us be challenged, through Richman’s examination of his own life, to ask of ourselves: How should we presume?” (From the book’s introduction.)

The second volume, in a way, of Richman’s seemingly ongoing memoir is a well written and engaging work that reads less like a book or list of events and achievements; rather, it reads very much like a reflection on his life. The very least a reader can take from this work is the art of reflecting, of bringing together experiences from different times in his or her life to the actions of the day. To me, daily reflection and bringing oneself into account is a powerful tool for self-improvement and something everyone needs to learn to do.

As someone who still has many years to go before retirement, Shivers & Signposts: The Journey Continues was a way to think ahead: what could I be missing out on that I would deeply regret? What cultural influences am I under that are making me head in a direction very different from the one I think I am heading towards? Like any well thought out reflection, Richman’s becomes a stimulating one for my own, despite the sometimes judgmental views on aspects of modern life. To be read attentively with an ear out for one’s own experiences, Shivers & Signposts: The Journey Continues can potentially be a book that would inspire readers to adjust their lives according to what they want it to be rather than to what they are told it should be.