With master’s degrees in education, special education, and counseling, Anjenique “Jen” Hughes is a high school English and math teacher who loves teaching and mentoring young people. She enjoys traveling and has worked with youth on five continents. Saying she is “young at heart” is an understatement; she is fluent in sarcasm, breaks eardrums with her teacher voice (students have complained when they were within earshot), and cracks sarcastic jokes with the best of her students. Her work with ethnically and socioeconomically diverse youth has inspired her to write books that appeal to a broad variety of students seeking stories of bravery, perseverance, loyalty, and success.

Under the totalitarian reign of the 23rd century’s world’s government- The Sovereign Regime- control is made possible by the identity chip implanted in every human being, recording everything that is seen, done, and experienced. 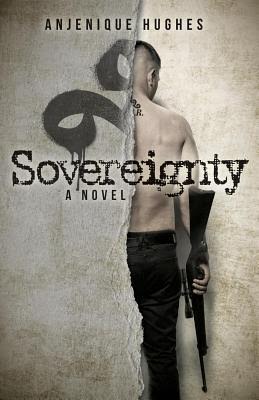 When Goro inadvertently overhears an exchange of sensitive information, causing him to confront the truth about his world and prompting him to choose his true loyalties, his dream of revolution kicks into high gear. Goro doesn’t know he has covert intel in his possession both the SR and the resistance movement are desperate to acquire.

Determined to attempt the impossible task of bringing down the world government, he and his closest friends gain access to the key to ultimately deciding who has sovereignty.

But who will get to Goro first: The resistance or the Sovereign Regime?

Sovereignty is a well-written, engaging, and interesting book.  There are some parts that are a little difficult to read in that the flow gets a little blocked either because of repetition (some of Goro’s thoughts and reflections at the beginning of the book are repeated a few too many times rather than increasingly dug into) but overall it didn’t negatively affect the reading experience created by Hughes.

The most satisfying thing about this book is how, contrary to many other young adult dystopian fictions, it doesn’t focus as much on the violence and horrors of the world but rather on the way it got there and some of the principles that govern it.  It didn’t quite satisfy my itch though—it could have gone further.  But it is, in this sense, still ground-breaking in many ways.

One of the most powerful things that Hughes did was to create a world in which the problems faced can easily be paralleled to those that we are having in our world today, but not in a cheesy, awkward, or clumsy way.  I felt myself thinking often “Huh, this is a lot like the challenge of [insert problem of choice here] we have these days” which made me curious to see how this challenge affected the people in the world created in this book.  This is all the more reason for the author to dig things further in subsequent books in the series, so that from these parallels perhaps readers can glean insights they can apply in their own efforts to create a better world.